Archive for the tag “Swedish”

I promise mine turned out better than that.  They didn’t bounce, for one thing. I’m also pretty sure those aren’t actually Swedish meatballs–regular meatballs made by a Swedish chef don’t count! But he’s a Muppet, so we’ll let it slide!

Anyway, clearly what that guy was trying to tell you is that for my 12th day and 14th recipe of the challenge (almost at the halfway point!), I made Swedish meatballs from Jo Cooks!

All in all, they’re pretty simple (and pretty not-so-good for you…fried meatballs in a butter and sour cream sauce!). I’d certainly make these again, but I think next time I’ll bake the meatballs instead of fry them (save where I can.)

I pretty much followed this recipe exactly, except I used wheat bread instead of white bread (because it’s what I had), and I lost my allspice (seriously, I have NO idea where it went…not happy), so I omitted it.

I had these for lunch the next day along with leftover cauliflower curry.  It was quite the diverse lunch, yet they went together oddly well.

I have a ton of these leftover now, but I have a hunch they will freeze well, and who doesn’t love homemade Swedish meatballs on a whim?

Confession: my first Swedish meatball experience was the frozen, Lean Cuisine version. These are way better than that.  Freeze them in individual portions, and I have my very own homemade version! (Though more cuisine, less lean.) 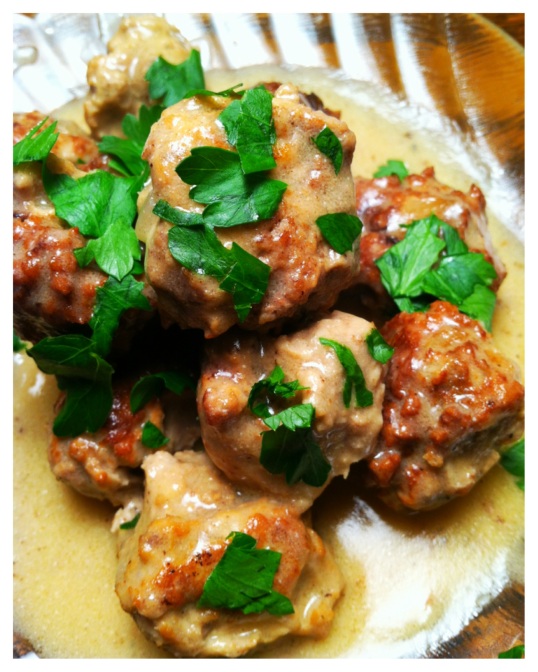 And these are a *tad* more authentic than the Swedish chef’s. Except there’s no possibility that Kermit will come be my sous chef…bummer.