Archive for the tag “maple”

WIAW: What I Ate…in Disney World!!

I’m officially back from Disney World and back into real life (wah.) BUT I have lots and lots of yummy Disney treats to share with you now! (YAY!)

I ate a LOT while I was in WDW, so I’m starting off with the best of all: Disney sweets and treats.

I’m not even going to pretend that I ate healthily while on vacation. I did at times (you’ll see that later), but for the most part I enjoyed myself, right down to the very food I ate. This is pretty evident when you realize that I have about a dozen pictures just of sweets and snacks. And I didn’t even photograph nearly everything I ate, just some of the highlights. (Also, there were times, like when I went to afternoon tea at the Grand Floridian’s Garden Tea Room, that I didn’t feel it was appropriate to keep snapping photo after photo–but don’t worry, it does make an appearance below!)

So, without any further ado, I give you WIAW: Disney Sweets and Treats…

1-Dark-chocolate covered caramel with sea salt from Karamell-Küche in Epcot’s Germany pavilion. See the size of that thing? That’s ALL caramel, covered with *just* enough chocolate. Even I, with my mountain of a sweet tooth, could barely finish the thing!
2-Red velvet cupcake from Contempo Cafe in the Contemporary Resort. This cupcake was recommended to me almost as soon as I walked in the door–how could I say no? But I know what you’re thinking: “Gee, that looks an awful lot like buttercream frosting. But Alex, being the huge red velvet fan you are, you must know you need cream cheese frosting!” Totally agree. Good thing it’s filled with it. 😉 Yup. Heavenly. I ate the whole damn thing.
3-The classic, the quintessential Dole Whip float. So famous that this was my first one ever. Pineapple soft-serve with pineapple juice. Super refreshing!
4-Carrot cake cookie sandwich (two large carrot cake rounds filled with cream cheese frosting) and coffee in Hollywood Studios. Breakfast of champions. 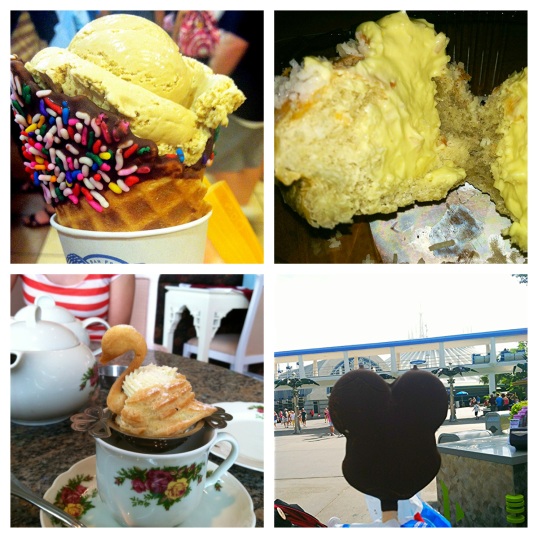 1-Coffee ice cream in a sprinkle- and chocolate-dipped homemade waffle cone from Ghiradelli’s in Downtown Disney. Awesome bus-riding snack!
2-School bread from Epcot’s Norway pavilion: a savory-sweet bread filled with sweet custard and topped with icing and coconut. I didn’t love it as much as I’d hoped, unfortunately.
3-Told you afternoon tea would make an appearance. This wasn’t even my dessert, it was Kevin’s, but it was too pretty not to share: pastry filled with vanilla bean mousse…in the shape of a swan! Adorable 🙂
4-And of course, a classic: the Mickey Premium Bar! Your basic vanilla ice cream-dark chocolate shell combo, but the mouse makes it special! He’s posing in front of another classic fave: Space Mountain!

1-Venturing into the treat, away from the sweet momentarily. Chips with chipotle salsa and queso dip from La Cava de Tequila in Epcot’s Mexico pavilion. Salty, cheesy, spicy–YUM!
2-What’s a tequila bar without some margaritas?! Aguacate Margarita (Avocado Margarita.) Oddly, tasted banana-y, which was a little weird. Don’t worry, there was extensive menu to taste from! 😉
3-Back to the sweet (cause it’s me): Maple Crème Brûlée from Le Cellier in Epcot’s Canada pavilion. I had this the last time I was in Disney–2 years ago–and have been thinking about it ever since. Hands down the best crème brûlée I’ve ever had.
4-More frozen treats–frozen banana covered in chocolate and peanuts. I had two of these, they were that good. And SO simple–I’m totally making these at home. Also the breakfast of champions.

So, this is the last week of Jen’s awesome WIAW theme of “Summer Staples.” Does Disney food count as a summer staple? I sure think so!

Well, there ya have it, folks. Installment 1 of what I ate in Walt Disney World. Are you drooling yet? If not, no worries–there’s more where that came from! 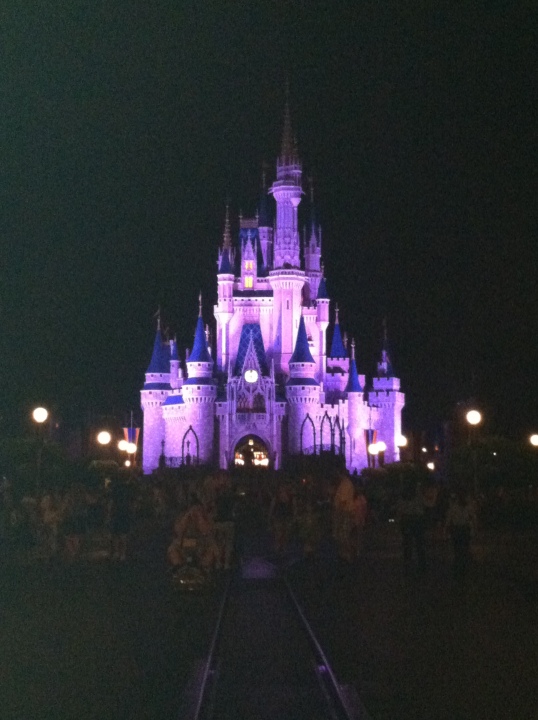