Technically, Monticello’s did not participate in Restaurant Week.  However, it was a new restaurant during the course of that week, so I’m going to count it. Also, I needed something to make Part 1 feel complete. (This was supposed to be a three-party series, but we really wanted to go to Tre Amici in Long Branch, but it never worked out–problem after problem! Someone really didn’t want us to go there! Alas, there will be no “Mockingjay” to my “Hunger Games,” and you will have to settle for a duology.)

Anyway, I apologize now because there are no pictures from Monticello’s. Kevin and I went with a big group of friends we did theater with, so between all the catching up there was no time to stop and take photos (well, not of the food anyway.)

Monticello’s is BYOB, which is great and easy on the wallet, considering the menu’s a bit on the pricey side. The best part, though, is that if you bring in a bottle Cabernet, Rioja, Merlot, Zinfandel or Shiraz, they will make it into sangria using their special house recipe. And it is YUMMY! (We brought Shiraz for ours.)

Unfortunately, from a culinary perspective, that was the best part of the meal (aside from the bread, maybe–piping hot and soft!) Otherwise, I’d say the food was okay at best. I’ll be honest, though, I was quite jealous, because while I didn’t enjoy my food much, everyone around me seemed to love theirs. I even sampled a bit of Kevin’s Duck Breast over Papardelle with a rosemary Merlot sauce, and it was superior to mine.

To start, my friend and I split fried calamari. Now, I will preface this with the fact that I am very, very picky about fried calamari. I only recently even started eating it, and I only like it when it is cooked perfectly. Any rubberiness and I’m out. That being said, I found Monticello’s calamari to be tough to chew and a bit rubbery, though the breading and sauce were tasty. (I finished chewing off the breading before I finished the calamari itself though, which was sort of a weird sensation.) My friend, on the other hand, loved it. So, maybe I’m just picky. (Not maybe, I am picky.)

I still had faith in my entrée, though. I was in a simple mood and went for a very basic dish: gnocchi with pesto. I love both of these things, especially a good, bright, herbal pesto.  This pesto wasn’t that. It was creamy (what?) and very garlicky, but had almost none of the fresh bright crispness that I love from pesto. It felt heavy and hot, not cool and light like a pesto should, especially over something as dense as gnocchi. The gnocchi themselves weren’t great, either, and started to feel to mushy as I ate. I couldn’t finish the dish despite the fact that I was still hungry. Not at all what I was expecting.

However, the evening for me (thankfully) was not about the food, but the company. Good friends, good wine and good conversation can make up for even the worst of meals. (Still, a good meal certainly ups the ante!)

I would give Monticello’s another chance, as long as I stay far away from their pesto sauce and fried calamari. Everyone around me raved about their dishes, and they all had larger, heartier entrées. Maybe that’s the secret to Monticello’s–the Chicken Saltimboca over the pasta with sauce. I’d give it another shot, but I’d go in skeptical. 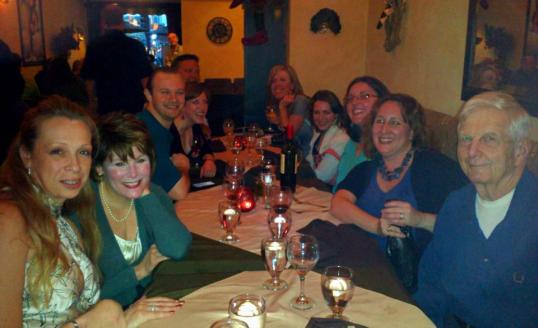