My fridge has been lacking in the produce lately, so I was very glad when I had a half day at work last week and Kevin and I could hit the farmer’s markets. He only needed to get corn for dinner that night, but I walked away with a far more impressive haul: 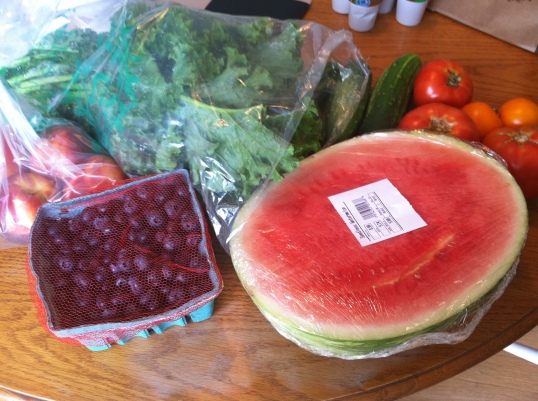 We made our rounds. We started at Sickle’s Market, a part garden center, part farmer’s market and part general store. It’s a year-round place, with the majority of the produce and groceries indoors, but the quality and selection is more akin to a good farmer’s market than a supermarket.

Anyway, everywhere I turned I found something else I had to have. It’s a miracle I only walked away with what I did.

I ended up walking away with a bunch of kale (meant to make kale chips, but that didn’t go quite as planned–more on that later), five nectarines, a quart of Jersey-fresh blueberries and half a watermelon. There was also an almond croissant in there that didn’t make it through the car ride home. (Don’t judge.)

We also hit a small, local produce stand, Trader Joe’s and Wegman’s, where I grabbed a couple of avocados so I could make more of this before leaving on vacation.

Over the weekend, I also got a goody bag of home-grown tomatoes and cucumbers from a friend of mine. She’s been growing them in her yard and had more than she knew what to do with, so I gladly volunteered to take some of that pesky produce off her hands. Then I realized I don’t know what to do with five tomatoes and four cucumbers either. So I’ve been eating a lot of tomato, mozzarella and basil salad and drinking tons of cucumber-lemon water. I’m not complaining.

Oh, and in case you were wondering, Kevin did get the fresh Jersey corn he was looking for–and it was delicious! It was so sweet it didn’t even need butter. Just boiled with some salt, and I could’ve eaten all six ears! Also, I forgot how much fun it can be to shuck corn. (I can’t believe I just said that.)

Speaking of vacation, (I spoke of it somewhere, I’m sure…) I’m getting pretty stoked to go to Disney World in two days! (Yup, I’m a child. Whatever. Happiest place on Earth, man.) Anyway, I’ve been compiling a list of certain things I want to try to do while I’m down there this time around. It’s a little lopsided though:

Yup, my Things I want to eat list is far longer than my Things I want to do list, especially since some of the things I want to do a really food-related anyway. Really, though, is anyone even surprised? I’ll be lucky if they’re not rolling me out of the parks. The saddest part is there is literally, like, one healthy thing on that food list, and that’s the AK egg roll stand (really!) because I want to go there for their veggie spring rolls, Asian noodle salad and fruit salad.

What? I’m on vacation. Don’t judge.

Well, not quite yet. Right now, I’m still at work, eating avocado-black bean salsa and wishing I was already in sunny Florida. (New Jersey’s a bit cloudy today…)

Expect some fun, Disney-themed posts in the coming weeks!